In a previous blogpost, I wrote about a security bug I found in GitHub, which would have allowed an attacker to get write access to almost any public repository. As a quick recap:

This post describes a different security bug I found in GitHub, using a similar attack strategy. This post should be coherent on its own, but if you’re confused after reading it, you might find it useful to read the previous post, which goes into much more detail about the GitHub Actions security model.

Last summer, I took a look at how git and GitHub behave with unusual branch names.

In certain places, the git CLI allows the use of either a branch or a commit hash. For example, to switch to a branch called my-branch, one can use:

Similarly, to switch to a specific commit, one can use a commit hash as a command-line argument:

Of course, we can choose the names of our branches. What happens if we decide to create a branch called a047be85247755cdbe0acce6f1dafc8beb84f2ac (the same as the commit hash)?

Git allows the branch to be created, albeit with a warning. Then when using checkout and other commands, git interprets a047be85247755cdbe0acce6f1dafc8beb84f2ac as a branch rather than a commit hash.

On the other hand, GitHub rejects the branch completely:1

That’s no fun. What if we name the branch after a shorthash of the commit, instead of the full hash?

To summarize the last section:

At this point, when we go to github.com/someone/some-repo/tree/a047be8, GitHub chooses to show the files for the a047be8 branch, rather than showing files for the a047be8 commit.2 I think this is a reasonable choice. If GitHub resolved a047be8 as a commit shorthash, then there would be no way to refer to the branch with that name. As-is, resolving a047be8 as a branch only causes problems if someone is using a shorthash in a URL and expecting it to resolve to a commit. But that use case is inadvisable anyway because it would also fail if a shorthash collision occurs.

In other words, the branch a047be8 is effectively “shadowing” the commit with the shorthash a047be8, preventing the commit from being referred to using that shorthash.

However, the commit still exists. If the branch a047be8 is ever deleted, then the name a047be8 will suddenly start getting resolved to the commit a047be85247755cdbe0acce6f1dafc8beb84f2ac again – even if someone had no idea that the commit existed, and was just trying to find the now-deleted branch. This edge case seemed like a good place to look for bugs.

At this point, I tried an experiment to see how well GitHub would handle deleted branches that matched commit shorthashes.

In the previous examples, we had a commit with a particular shorthash in a repository, and then we pushed a branch with a name matching the shorthash. Of course, we could also do things in reverse – if a branch already exists, we could sometimes push a commit with a shorthash that matches the branch name. So I did the following:

I was about to give up and move onto something else when I noticed something strange: I was allowed to reopen the pull request in the GitHub UI. 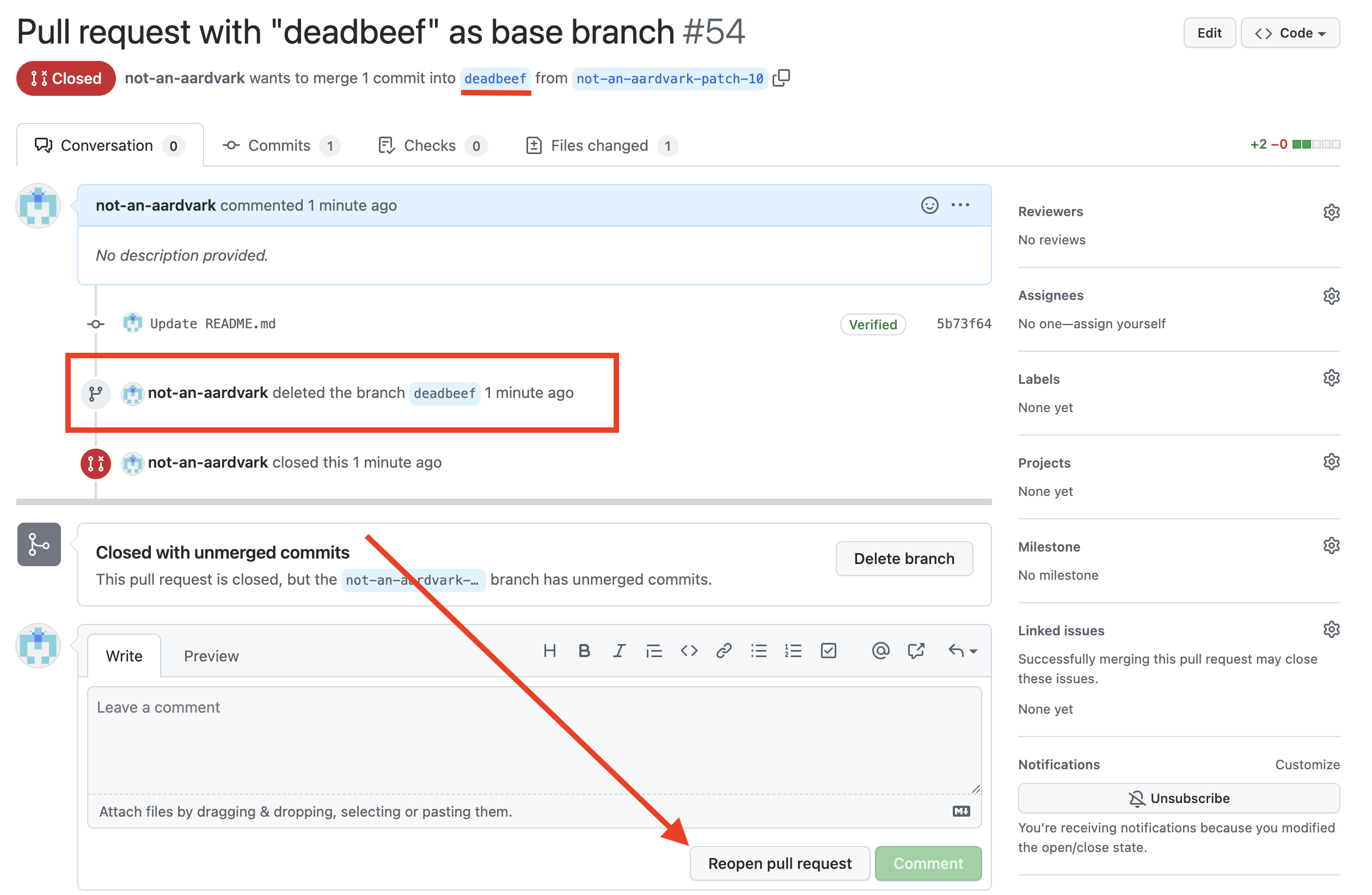 Why? Well, we’ve fooled GitHub into thinking that the base branch called deadbeef still exists – even though it doesn’t – because when GitHub attempts to find the code at the deadbeef branch, it hits the commit with the shorthash deadbeef rather than finding nothing. As a result, GitHub allows the pull request to be reopened.

Return of the nonsensical pull requests

At this point, we have an open pull request where the base branch points to a commit with the shorthash deadbeef, rather than an actual branch.

This is almost identical to the scenario described in the previous blogpost that was mentioned earlier, where a “nonsensical” pull request like this could be used to steal GitHub Actions secrets. The exploit path in that post was fixed in February 2021 by adding validation to the “edit base branch” endpoint – effectively preventing that endpoint from being used to create nonsensical pull requests. However, at the time, GitHub didn’t add checks for branch existence to the GitHub Actions backend. In other words, at that point GitHub Actions was still vulnerable to these nonsensical pull requests, but it was no longer believed to be possible to create one.

When I tried out using GitHub Actions using this new method of creating nonsensical pull requests, I found that it was still possible to steal secrets using pull_request_target Actions workflows.

At this point, we have a workable attack scenario:

Note that this attack scenario requires significant user interaction (an attacker would need to wait for someone to push an unusually-named branch by chance), so it’s much less severe than the attack described in the previous blogpost.

After I reported this issue to GitHub, they added a fix to ensure that pull_request_target events can only trigger from branches and not stray commits, which prevents this attack from working. At the time of writing this, it’s still possible to reopen a pull request with a deleted base branch, if the base branch name matches a commit shorthash in the repository. I don’t think that has any security impact anymore, but it looks pretty funny.

I donated the bounty for this report to the GiveWell Maximum Impact Fund, and GitHub generously matched the donation.