I’m a big fan of the “try weird stuff and see what happens” approach to security research. Modern software has a huge number of bugs, and engineering teams often have to prioritize which bugs to fix, based in part on the number of users affected by each bug. The result is that glaringly obvious bugs (say, a website being down) tend to get fixed very quickly. On the other hand, a bug that only occurs in exceedingly unusual circumstances, and has no obvious security impact, can stick around for a long time. Occasionally, new code piles up around the bug, making faulty assumptions about how the buggy system works. Whenever I find one of those bugs, it can be fun to trigger the buggy code in a variety of different ways and see if anything else breaks. Provided that my testing isn’t causing problems for anyone else, this is satisfying in the same way that watching structural demolition videos is satisfying – you can never tell which parts of a structure depend on other parts,1 until you break one small piece and the whole architecture topples.

I recently found a bug like that in GitHub’s pull requests.

Every pull request is supposed to have a “base branch” (also known as a “base ref”), which specifies the branch that a set of proposed changes is being compared against. Often, this base branch is the “main” branch of a repository.

As the creator of a pull request, we can decide which base branch it should have. For instance, instead of setting the base branch to the “main” branch, we could set it to another branch that’s still a work in progress, or a release branch that gets updated less frequently.

But this is a user input supplied as a string, so technically we don’t have to provide a branch name. What would happen if we created a pull request using GitHub’s API with the “base branch” name set to something else, such as a commit hash?

When I tried this on a test repository, GitHub politely returned an error:

Well, that seems reasonable. Not sure what I expected.

However, software sometimes does stuff regardless of whether it makes sense, so here we have a pull request where the base branch is a commit. 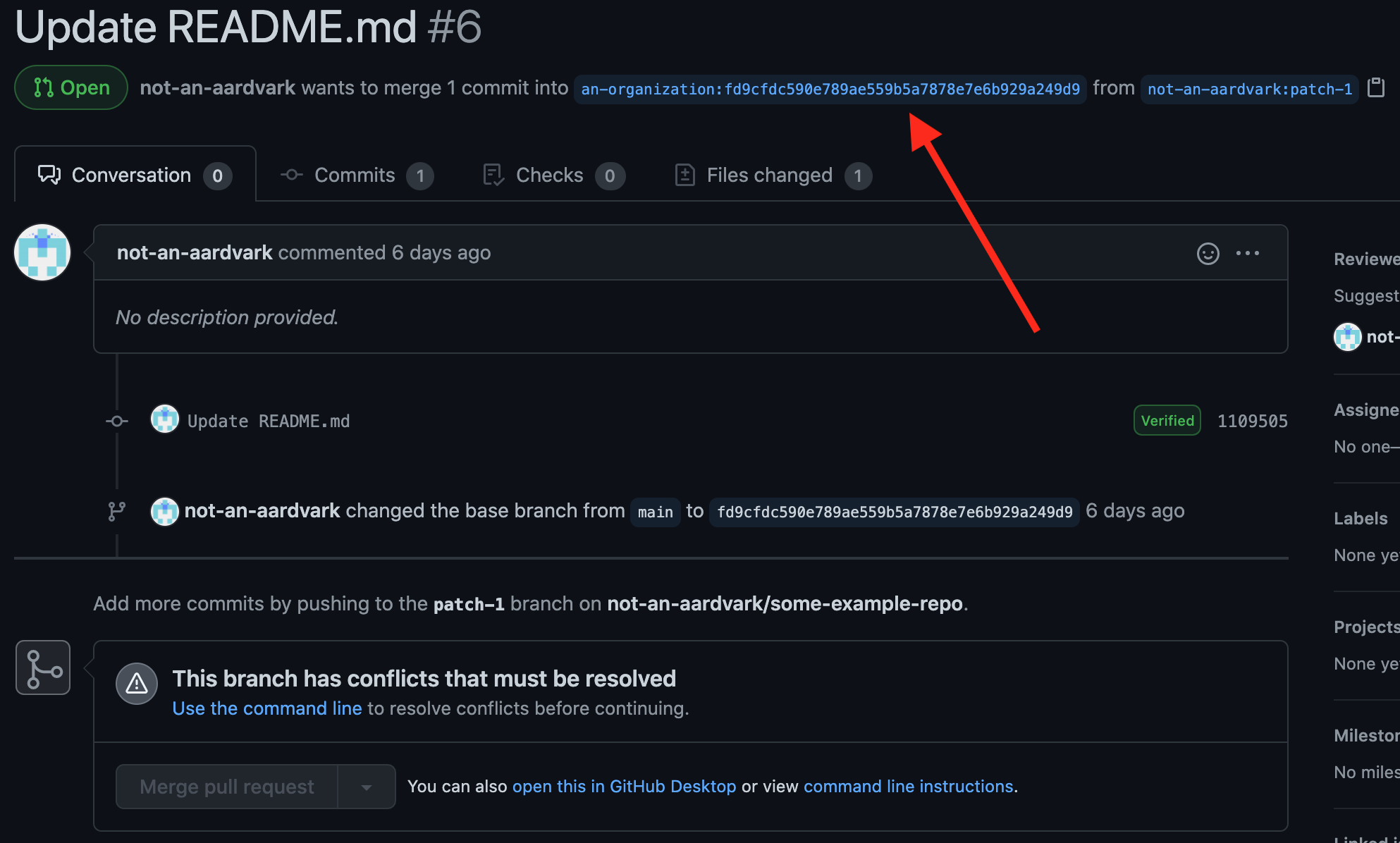 Separately, I also tried setting the base ref to a commit shorthash (rather than a full 40-character hash), with similar results in the UI. When I then pushed another commit with the same shorthash, the link to the base branch in the UI started returning a 404 (since it was linking to an ambiguous shorthash), but everything else seemed to keep working.

So that’s all nice, but it didn’t seem particularly useful or security-relevant. While this was technically only possible as a result of a bug, it was very much a “Doctor, it hurts when I do this” situation – the buggy behavior was entirely self-inflicted, and it wasn’t clear why anyone would want to self-inflict it. Even if I created the pull request on someone else’s repository, they could just, say, close the pull request. I spent a bit of time trying to figure out whether the bug was actually useful for anything.

Let’s take a brief detour to talk about GitHub Actions, an automation platform built into GitHub. GitHub Actions is effectively a hosted bot service – it allows a project to run arbitrary code in a sandbox in response to events that occur on GitHub. For example, some common uses of GitHub Actions include running a project’s tests every time someone pushes a commit, deploying recent changes to an external server, and adding labels to newly-created GitHub issues. (I used to maintain large open-source projects, and I can attest that automation like this is very useful.)

GitHub Actions has an interesting permission model. To summarize:

Pull requests from forks are a special case for GitHub Actions.

However, it’s important that the author of a pull request can’t access the repository’s secrets (e.g. by updating a workflow file to print out the secrets instead of running tests). To address this issue, GitHub provides two different ways to trigger Actions workflows from pull requests:

So in case you didn’t spot it, the nonsensical pull requests that we created earlier weren’t entirely useless – they also had a side-effect of breaking the GitHub Actions permission model.

To see why, look at the last part of the previous section:

Since the base branch is part of the base repository itself and not part of a fork, workflows triggered by pull_request_target are trusted and run with access to secrets.

Only people with write access to the base repository can push to branches in it. So this seems fine, provided that the “base branch” of a pull request is actually a branch.

But we just created a pull request where the “base branch” is a commit hash, not a branch. And anyone can create a new commit hash in the base repository, since GitHub shares commits between forks.

As a result, an attacker could:

And then the malicious Actions workflow would run, immediately, with the secrets from the victim repository. At this point, the attacker would have write access to the repository (due to the GITHUB_TOKEN secret). They would also have access to any services that the repository had integrated with via GitHub Actions secrets.

Many open-source projects publish directly to package managers from GitHub, using a credential saved as a GitHub Actions secret. As a result, it likely would have been possible for an attacker to pull off a much larger-scale version of the eslint-scope supply chain attack, by exploiting this issue on a bunch of open-source projects at once, stealing all of their package manager credentials, and publishing a bunch of package updates containing malware.5 6

As always, the GitHub security team was very responsive and patched the issue quickly.